With Pope Emeritus Benedict XVI, we too are “convinced that the ecclesial crisis in which we find ourselves today depends in great part on the collapse of the liturgy.”*

Thus we have written lately of the need for right worship; the mystical signification of Holy Mass, and the problem of liturgical “preference” – and although one dreads “proofs by negation” when treating such subjects, if one seeks a clear illustration…

…this one is almost unbelievable.

Last week was Holy Week, the great days of the mysteries of our salvation, in which Christ instituted the Sacraments of His Eucharist and Holy Orders, to perpetuate for all time His own supreme act of divine worship. This alone is true worship, for which reason His Apostles are commanded for all time to extend it to the ends of the earth (cf. Mt 28:20), to the glory of Him Who seeks such worshippers (cf Jn 4:23).

It was in the midst of the very first celebration of Holy Mass that Judas went out to betray Our Lord, completing the nefarious mission which he had secretly accepted earlier (cf. Lk 22:3-6); hence the traditional designation of the Wednesday in Holy Week as “Spy Wednesday.”

On Spy Wednesday of 2018, one of the successors of the Apostles, Archbishop Gomez of Los Angeles, issued a set of Protocols which authorizes such an incredible range of sacrileges and profanations, it’s a wonder that the diocesan chancery building is still standing.

Among other things, these Protocols call for:

Let the reader understand. This is sacrilege.

Scratch that. This is a compendium of officially prescribed sacrileges, issued with episcopal authority and destined for reception by more than 5.3 million Catholic faithful within the Archdiocese. Alas for our times.

What can Archbishop Gomez answer the many missionaries and Saints who first brought right worship to California? Scores of priests shed their blood as martyrs to liberate thousands of souls from enslavement to idols and the darkness of unholy worship – only to find that their successors now “welcome” those very rites as “fitting,” even “preferred” within the Holy Sacrifice of the Mass.

The North American missionaries once came save the heathen; their successors have become the heathen. Alas for the divine chastisement that surely awaits.

Are there any bishops left in this country willing to say even a word (much less a “word on fire”) condemning such profanations? about right worship as man’s highest duty? Are there no priests to openly defend the divine rights of Christ in the Sacrament of His Love, as the North American martyrs did? Are there none to affirm “the right of Christ’s faithful to a liturgical celebration that is an expression of the Church’s life in accordance with her tradition and discipline”? (Redemptionis Sacramentum, n. 11)

Alas, it seems such prelates are few.

They certainly haven’t had many positive examples to follow, as the See of Peter itself has been rather amenable to native pagan rites over the past few decades. 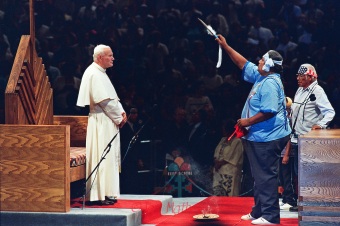 Still, they are not therefore absolved of their responsibility before God to offer that form of worship which alone is pleasing to Him, maintaining its integrity and handing it on, just as they once received it (cf. 1 Cor 11).

What is perhaps most troubling about the LA Protocols is the theological justification given for the new liturgical practices, calling them:

“[A]cceptable and compatible practices since Catholic Native Americans relate each of them to the persons[sic] of the Trinity – the Creator-Grandfather, the Savior-Brother, and the Messenger-Spirit.” (p. 6)

If Catholic Native Americans can relate the pagan rites to Persons of the Trinity, it legitimizes them. Never mind those pesky Commandments about keeping a particular Name holy, or maintaining a particular form of worship of the true God.

If not blasphemous, this is at least the height of rationalism (and the inescapable conclusion of Novus Ordo liturgy, as we point out here).

This is also a cornerstone for the arch of religious indifferentism, closely paired with the modernist heresy in its tenet of vital immanence – doctrines condemned for nearly 200 years (cf. papal documents like Mirari Vos, the Syllabi of Pius IX or Pius X, Pascendi, Mortalium Animos, etc.). For the Protocols rest on the notion that so long as one offers a liturgical form Catholics can explain in a Catholic way, then it isn’t contrary to right faith or right worship – especially if Bishop approves.

Because deep down, aren’t we all really doing the same thing? Aren’t we all just seeking to honor God, whatever words or external gestures we might employ, or however we may name or conceive of Him?

“Not only are those who hold this opinion in error and deceived, but also in distorting the idea of true religion they reject it, and little by little, turn aside to naturalism and atheism, as it is called; from which it clearly follows that one who supports those who hold these theories and attempt to realize them, is altogether abandoning the divinely revealed religion” (Mortalium Animos, n. 2, emphasis added)

These LA Protocols not only allow for religious indifferentism, they celebrate it; inviting “the shared faith community to welcome and include diverse indigenous traditional perspectives that can enrich the prayer, faith, traditions and ceremonies of the Church” (p. 1).

With this kind of approach, one wonders about all that Sooner fuss a while back over the public black mass? Ah, if only those bishops had the LA Protocols in place, then they would have realized that our satanic brethren are simply honoring God in their own way… just as they understand Him… perhaps under different names, but which could nonetheless be interpreted in a Catholic manner…

What a fearful age for the Church, when one hesitates even to make such a sarcastic illustration, for fear that some bishop just might take it seriously!

What can we do, but cry to our pastors, Our Lady, and Our Lord?

A call to our shepherds: For God’s sake, please publicly decry sacrileges like these and stand up for Our Lord, defenseless in the Eucharist. We know you may be silenced, removed from your post, even stripped of your faculties and shuttled away by a hierarchy uncomfortable with your orthodoxy – but what else did you sign up for, if not persecution? Ask the faithful to support you, and they will respond. Please defend the Lord and His sheep, even if it means facing wolves in shepherds’ clothing.

To all Catholics: Please make many acts of reparation, so needful today.

Most Holy Trinity – Father, Son and Holy Spirit- I adore Thee profoundly. I offer Thee the most precious Body, Blood, Soul and Divinity of Jesus Christ, present in all the tabernacles of the world, in reparation for the outrages, sacrileges, and indifferences whereby He is offended. And through the infinite merits of His Most Sacred Heart and the Immaculate Heart of Mary, I beg of Thee the conversion of poor sinners.

The Archdiocese of Los Angeles can be reached for the expression of your respectful concerns here.

Leave a Reply to Could or Should? The Problem of Liturgical Preference (1 of 2) Cancel reply