Beginning at the Beginning 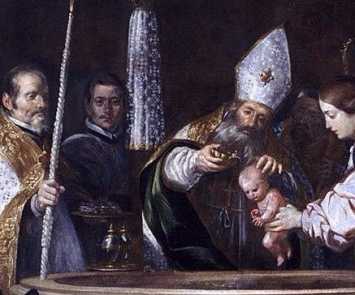 (A slightly altered version of this article also appears here at OnePeterFive; another great Catholic website)

It seemed fitting that our inaugural post should concern itself with a reflection on “the beginnings of Faith,” following the recent Baptism of our youngest child.

Although few things can match the natural beauty of a fall day in the upper Midwest, I still vividly recall my wife and myself making our way from the cool outside air into the hushed baptistry of our local cathedral, to witness the striking splendor of the Sacrament of Baptism conferred on our first child.

What a wonder it has been, to witness this Sacrament conferred on each of our children; to watch with the eyes of faith as the Blessed Trinity takes hold of this little creature to make it a fitting temple of divine glory, in fulfillment of Christ’s promise: “If anyone loves Me, he will keep My word; and My Father will love him, and We will come to him and make Our abode with him” (Jn 14:23). What peace and consolation is ours, recognizing that in Baptism, we give our children the greatest of gifts: entrance into supernatural life, a life that – if maintained in fidelity to the Word – will continue into an eternity of joy.

We have been impacted by this truth all the more in recent years, when two different couples in our circle of friends experienced the great sorrow of losing a small child. In both cases, the child was baptized and had not yet reached the age of reason – situations that were heartrending on the one hand, but on the other hand filled with consolation: as Wisdom would have it: “yet is their hope full of immortality.“

For the Church has infallibly declared and ever maintained that baptized children who die before the use of reason enter directly into eternal bliss – they are Saints.

“By this edict which will prevail forever, with apostolic authority we declare: that according to the common arrangement of God… the souls of children departing before the use of free will, reborn and baptized in that same baptism of Christ… immediately after their death… have been, are, and will be in heaven, in the kingdom of heaven and in celestial paradise with Christ, united in the company of the holy angels, and… see the divine essence by intuitive vision, and even face to face, with no mediating creature… and seeing thus they enjoy the same divine essence, and also that from such vision and enjoyment their souls, which now have departed, are truly blessed and they have eternal life and rest… [this] vision and enjoyment exist continuously and will continue even up to the last judgment and from then even unto eternity.”   – Benedictus Deus (1336)

This unchanging truth throws even greater light on the surpassing glory of this Sacrament – a glory that ought to be beautifully signified by the very ceremonies themselves. Just as the Mona Lisa deserves a lovely frame, so this masterpiece of grace that God creates in Baptism deserves a worthy rite and beautiful ceremonies.

It was chiefly this conviction that first launched me into a study of the rites in 2010.

Among other insights, I came away with a clear (albeit academic) awareness that the Catholic rite of Baptism (and just about everything else) had apparently undergone rather dramatic changes in the 1970’s: changes that ultimately made for a less impressive rite overall, and one which does not serve as effectively to dispose the candidate to sanctifying grace (some of the theology behind this shift is distilled in the Further Reading suggested below).

Learning this, I resolved to give something better to my own children. As it turns out, Pope Benedict XVI had made this “something better” clearly and widely available to Catholics everywhere, just three years earlier.

With his document Summorum Pontificum of 2007, Pope Benedict clarified once and for all that the traditional “pre-Vatican II” rites of Holy Mass (the “Latin Mass”) and the Sacraments had never been dissolved or superseded, but that they remain the perpetual heritage of the Church’s worship, the priceless treasure of every believing Catholic: “What earlier generations held as sacred, remains sacred and great for us too, and it cannot be all of a sudden entirely forbidden or even considered harmful. It behooves all of us to preserve the riches which have developed in the Church’s faith and prayer, and to give them their proper place.” The traditional rites are now often referred to as the “Extraordinary Form.”

This was all the encouragement we needed to give the gift of an “extraordinary” Baptism to our children, and each of them have since been baptized in the traditional rite. It is amazing; truly a form more befitting the mystery that is celebrated (little wonder it went unchanged for all those centuries before 1970!), and as we repeatedly availed ourselves of this great treasure of the Church’s sacramental patrimony, we began to learn still more about our Faith; and we found ourselves wanting to share this with others!

One way that we sought to do this in our own family was by creating a little printable Baptism program for each child’s baptism day, so that everyone gathered for the ceremony could follow along with the prayers, be edified by orthodox and accurate explanatory notes, and have a profound memento of the great occasion to take home with them for further reflection afterward.

This has been such a great resource for our family, that we decided to make a customizable version, available here; we hope it serves to make this noble rite more accessible for all the faithful.

The particular beauty of the traditional rite stands out in high relief when one reads the Early Church Fathers. There is no mistaking the glory and necessity of this Sacrament for eternal salvation in their writing, and the importance of Baptism comes across in all their apostolic labors.

To cite one of my favorite examples, here are the words of St. Hippolytus of Rome (+236), a pupil of the great St. Irenaeus:

“Perhaps someone will ask: ‘What does it conduce unto piety to be baptized?’ In the first place, that you may do what has seemed good to God; in the next place, being born again by water unto God so that you change your first birth, which was from concupiscence, and are able to attain salvation, which would otherwise be impossible. For thus the [Lord] has sworn to us: ‘Amen, I say to you, unless you are born again with living water, into the name of the Father, Son, and Holy Spirit, you shall not enter into the kingdom of heaven.’ Therefore, fly to the water, for this alone can extinguish the fire. He who will not come to the water still carries around with him the spirit of insanity for the sake of which he will not come to the living water for his own salvation.” – Homilies, 11:26

I believe that restoring the traditional rite of Baptism and combining it with a more focused pre- and post-baptismal catechesis would yield tremendous fruit in the Church’s labor for souls. Furthermore, the need for a great restoration of Catholic tradition in all quarters is a current running throughout our work and writing on this blog.

I was further convinced of this need from an unexpected quarter, when I recently had the privilege of being invited to craft some reference material for a local interdenominational men’s bible study. Now, in my experience, this kind of affair is typically a constant rehash of some version of “What does this verse mean to you?” coupled with constant reminders that everyone has their own interpretation of Scripture and that’s fine because God loves us all (read: truth doesn’t really matter)… Perhaps it was a wiser time when Catholics avoided such gatherings as dangerous to the Faith.

Imagine my excitement then, when this particular group informed me that they were undertaking a study of the Gospel of John, and had learned through the grapevine that I might have some helpful “historical resources” to share with them regarding how “those ancient Christians” might have interpreted the text; and would I be able to share something on, say, John Chapter 3, wherein Jesus speaks with Nicodemus about being “born again of water and spirit”?

I was happy to oblige, and pleased to find that the little John 3 resource I generated for the group (as well as a later one on John 6) went a long way in helping them to press the question, namely: “Wait a tick – if Christians for hundreds of years believed this, then why don’t we believe that today? Are there any denominations around here that still believe all the same things as those ancient Christians?”

Obviously this was (and is) only a starting point, but it was a tremendously important one for that group – and it offers a similarly helpful route for other Catholics to take in inviting our separated brethren to join us in the Faith. As the famous convert Bl. John Henry Cardinal Newman attested: “To be deep in history is to cease to be Protestant.” Coupled with the virtues of integrity and humility, in obedience to the Spirit of God and the discipline of good research, a focused study like this could proffer a unique opportunity to embrace the true Faith, preserved inviolate from the Apostles to our current day in the One, Holy, Catholic, and Apostolic Church; and this Faith will only be the better known and loved through a restoration of Catholic tradition.

Good Lord, speed the day. And bravo the restoration!